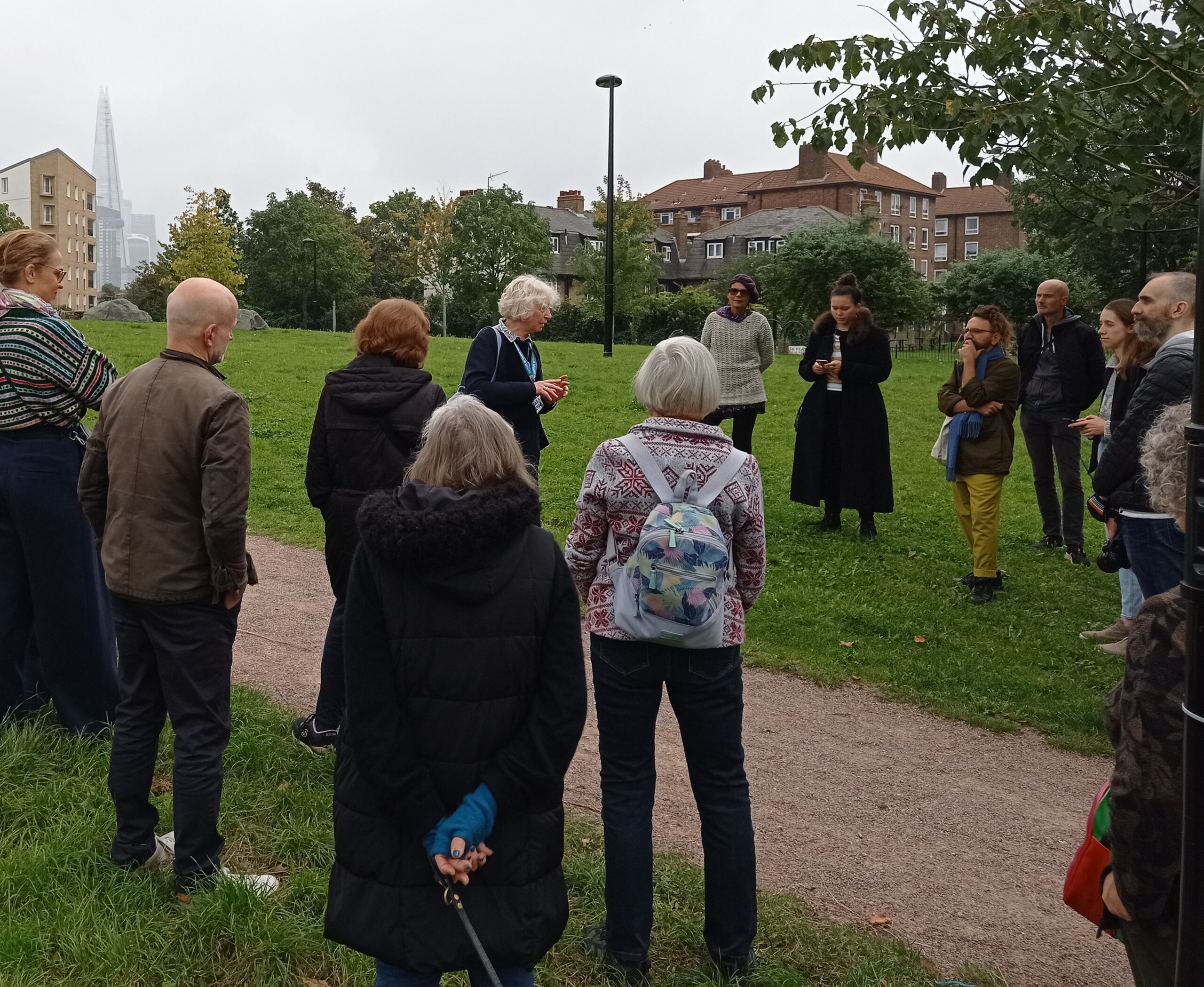 A walking tour of Walworth

On Sunday 10th October 2021, we were fortunate enough to have the local historian and Blue Badge Guide, Isobel Durant come and host a walking heritage tour of Walworth for us!

We used posters to reach out on a local level and this time it really spoke to a lot of our neighbours in Walworth – the 25 spots on the tour were completely filled out and we had many more waiting for a space to open!

We all met at St. Peter’s Church on the Sunday morning and made our way through memorable spaces across the neighbourhood leading up to Elephant and Castle. Isobel shared with us the rich horticultural history of Walworth.

Home to many food markets, it was a popular area for nurseries and food growing. Costermongers (sellers of fruit, particularly apples) were commonplace in the area, with many front rooms being used as storerooms for the vendors! There are many signs of the market history of the area with the etchings of numbers still engraved in the pavements off East Street, and subtle details from the past are very much still alive. Townley Street is named after the nursery owner Edward Townley and the well-known Nursery Row was exactly that – a row of nurseries! Isobel also shared with us the history of local characters such as James Maddock, a notable character from the area, who grew nectarine and peach trees from seed and began the first florists directory whilst living in the area. The history of William Curtis, a respected botanist who went on to start the Kew Magazine and form the oldest society of natural history, as well as later becoming the designer for Victoria Park.

We also gained an insight into how unique the area was as one of a few places in the city were many ‘settlements’ were formed. They were set up by well-to-do liberals in deprived areas, Browning Street is named after one such individual Robet Browning who sought to help residents of the area. At the time in the 1800’s it was extremely cramped place full of many workhouses. Hearing the history of how it developed into what it is today was completely fascinating.

We ended the walk at one of our member gardens, Lamlash Garden, where we were warmly welcomed with a tour of the site. It is home to many allotments beds, a pond, glasshouse, a beautiful Elizabethan inspired herbal garden. A truly beautiful haven just behind Elephant and Castle. The garden is just off Lamlash Street a pedestrianised green walkway, converted some time ago due to the creativity and perseverance of residents. Home to numerous fruit trees, and passion fruits. It was a special event to share with the network and our local neighbours! No doubt more walks around the manor will come in 2022.

If you or your gardening group would like to get involved or find out more, get in touch
Email: welcome@walworthcgn.co.uk