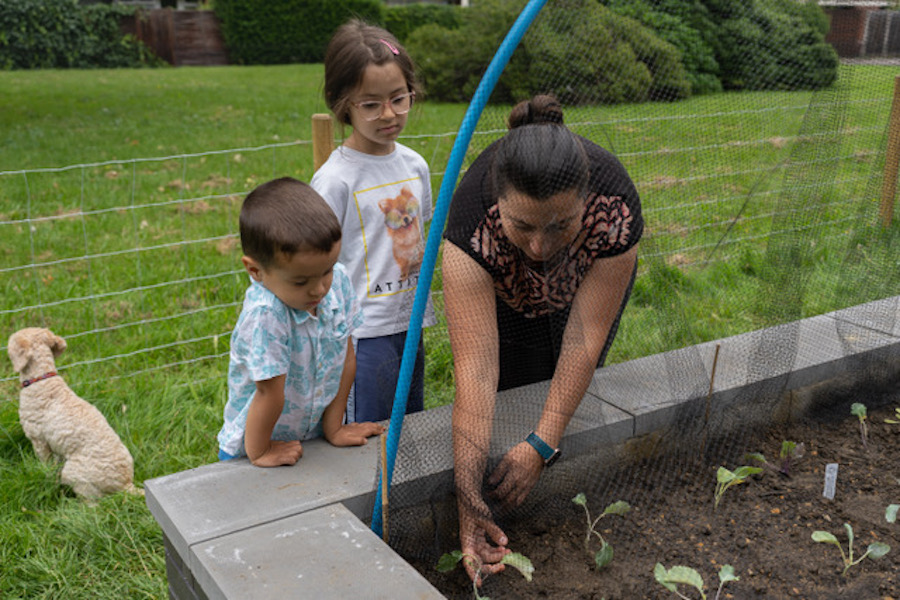 Following a close collaboration with Ruth, Sophie, & the Great Estates team, we were able to have a launch event for the new growing space on the Brandon, on Friday 20th August. A truly multinational effort, it was conceived by an Irishman, constructed by Peter & Niels (from Hungary & Iceland respectively) and we have allocated plots to residents from the UK, Jamaica, Colombia, Romania, France, and Italy.

The new raised beds are brick built and finished in the same blue engineering brick that was used when the estate was originally constructed in 1961. Each of the two new raised beds measures 10m x 3m, and these have been subdivided into plots measuring 3m x 2m that have been allocated to members of the Brandon gardening group. This has been a really successful collaboration between our TRA committee and the Great Estates team, and we have revitalised some underused space, and installed a lasting addition to our estate grounds. By choosing to construct the beds in brick, we have avoided the issues around maintenance and upkeep that are associated with wooden planters, constructed from railway sleepers.

The feedback from all the new gardeners has been ecstatic, and everybody is looking forward to getting some plants into their beds, and producing some organic produce by the end of the year. We would like to express our thanks to the Great Estates team, and everybody who has worked with up to turn this vision into a reality.

If you or your gardening group would like to get involved or find out more, get in touch
Email: welcome@walworthcgn.co.uk